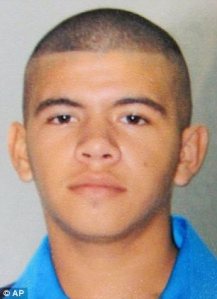 The priest who warned young people to stay on the right track at Jaime Gonzalez’ funeral had it exactly wrong. He took the easy path, and his warning dishonored the young man in the casket. Jaime was not a gang member or a criminal – until he brought a pellet gun to school, he did nothing out of the ordinary for most adolescents.

The hard path for the priest might have made some people at the funeral uncomfortable, but it would have been the truth. The hard path would have been to honor Jaime with pointed comments about how he died. Jaime died because the police followed a kill or be killed ethic when they entered Cummings Middle School. That is a rule for the battlefield, not for dealing with a frightened fifteen-year-old student.

The priest missed his mark, badly. He could have talked about police officers’ use of lethal force in the Cummings Middle School hallway. Instead, he suggested that Jaime’s death was his own fault. Shame for the priest, for the police, and for us if we bow down to militarized policemen who storm around killing people.

When police officers set dogs on peaceful demonstrators in Birmingham, when they used fire hoses to disperse and intimidate, the demonstrators did not back down. They said, “Do what you will to us. Let the world witness your inhumane acts.” Jaime’s case was different – he did not demonstrate against immoral treatment. Yet our reaction ought to be in the same spirit. Resist treatment that turns people into targets for lethal force. Call the police to account for their guilty acts. Don’t let police claim that their acts are legally justified. Morally, they are patently unjustified.

I don’t tweet about breaking events that often. In fact, the killing of Jaime Gonzalez in Brownsville, Texas may have been the first time I’ve done so. That shooting upset me, as it did many people. I typed these micro-posts during the day last Thursday, January 5, as the news reports came in:

Armed Texas 8th-grader shot and killed by police: mid-PM, and no details! No name of victim, no account of what happened? No discussion?

Police kill armed 15-year-old at school: “The individual confronted the officers, at which time they had to shoot him.” Good explanation!

Student killed by officers had pellet gun. The policemen were in the wrong here, and they will never admit it. They protected themselves.

Police kill teen at school. And the school requires parents to sign a release form to pick up their children? What did the release form say?

Once again: the police are wrong here. Gunning down an 8th grader in the school hallway with three bullets?

Texas police kill eight-grader with pellet gun. This would not have happened without Columbine and hyper-charged police. Police protection? Think again!

Jaime G. dead. They shot him in the back of the head – after the entire school was locked down! They shot to kill!

Here is confirmation of yesterday’s tweet, that the police will never admit they are wrong. They actively justify what they did! Here is an excerpt from http://news.yahoo.com/texas-school-shooting-many-questions-loom-234525229.html:

Jaime Gonzalez’s “parents have lamented police for their actions Wednesday, saying they could have taken non-lethal action. But there was broad agreement among law enforcement experts: If a suspect raises a weapon and refuses to put it down, officers are justified in shooting to kill.”

And that goes for a fifteen-year-old with a pellet gun in a school hallway! A frightened student who, on that morning, decided to die. If you don’t think we live in a police state, think again.

Update: Jaime Gonzalez died of gunshots to the torso. The wound at the back of his head occurred when he fell.

Lastly, here’s a message I wrote to a friend about the same event:

You might read this article, then my series of tweets on the subject.

I was extremely critical of the police response to Columbine. This killing is amazing to me, and for me grows directly from our acceptance of the way police behaved at Columbine. I can explain later.

Here are my tweets, along with a few on other subjects.

I think of those parents saying goodbye to their son in the morning. Then a few hours later they find out the police have gunned him down because he had a pellet gun. An official says the police probably had legal justification to use lethal force. Good God! Legal justification is not the point. Police charged into a middle school and gunned down a fifteen-year-old who had a pellet gun! Of all the poor police work we’ve heard about, this is among the worst.

My mom used to talk frequently about police training, police maturity, police having the skills necessary to resolve difficult situations without violence. Policemen with the right qualities could have calmed the student down. They certainly did not need to kill him.

The accounts I’ve read say the police charged in, shouted at Jaime to drop the weapon, then fired three shots at him, shooting to kill. From the moment they arrived, they brought nothing but force and violence. It bothers me so much that this killing happened, and even more, in a way, that so many of us seem to accept it. They seem to be saying, largely with silence, “It’s unfortunate, but if we want safety in our schools, we have to accept this kind of policing.” No. If we let police turn their guns on a fifteen-year-old in a middle school hallway, they will turn their weapons on us. When you look at police behavior in response to the Occupy movement, you can see they already have.

Here’s one more comment: why could the police not use rubber bullets? They came prepared for nothing but death – and self-protection. I know after 9/11 we just don’t call policemen cowards, but that’s what this is. Shooting a fifteen-year-old to prevent him from shooting you first is just cowardice. It’s not doing your job.

The matter of police not doing their jobs dates back to Columbine. The massacre at Columbine was an unusual situation at the time, and police were not especially well trained to handle it. Because of that, they followed standard procedures. They set up a command structure. They cordoned off a perimeter. They set up their communications. They searched students exiting the school. They dealt with the administrative tasks the come up when a disaster occurs. They stayed outside the building until they could enter safely. They wanted to get organized.

What should they have done? They should have entered the building immediately to save the wounded. Yes, that would have been dangerous, but so what? They should have followed the example of the Marines. The Marines are trained to go straight into the fiercest enemy fire to save a buddy. They don’t give up their lives foolishly, but they never leave a wounded buddy behind. When you go into battle with your fellow Marines, you know your friends will help you if you need it.

The police at Columbine did just the opposite. Their job in the community is to help people, yet they let the wounded bleed to death inside the school. I imagine students or faculty on that terrible morning thought to enter the school building to save their friends, but I’m sure if they tried the police would have kept them out. No one goes in, they’ll say, until we make sure it’s safe.

What’s the connection to Cummings Middle School in Brownsville? I expect police heard the criticism of their procedures at Columbine. They try to enter the building sooner now, not stay outside while they organize and evaluate. Their emphasis, however, is still on self-protection. They do not take time to evaluate the situation based on the evidence in front of them. Take the nature of the weapon Jaime Gonzalez held in his hand. Police officers know that a regular handgun and a pellet gun look similar. Yet they did not take time to determine what kind of gun Jaime had. They shot first and asked questions after it was too late.

Without doubt, policing can be hard, dangerous work. Sometimes an individual who wields a handgun shoots a policeman. That doesn’t mean if you encounter a fifteen-year-old student in a middle school hallway holding something that looks like a handgun, you shoot to kill him. It means you act with caution and some measure of courage. You don’t have to shout at the student so loudly that he becomes still more scared. You don’t have to fire first. You don’t have to fire at his torso. You fire at a person’s heart when you want to kill him with the fewest number of bullets possible. Nothing about the situation in the Cummings hallway ruled out warning shots. Nothing precluded rubber bullets.

In fact, no factor in that school situation called for firing any shots at all, except that policemen put self-protection ahead of community protection. If you confront a person who holds what you believe to be a lethal weapon, and the person refuses to drop it, the self-protective instinct if you have a gun is to shoot. But police officers weren’t called to the school to protect themselves. The principal called the police to protect the other students. Yet no other students were in the hallway when police shot Jaime Gonzalez. They killed Jaime not because he threatened other students at the moment, but in order to protect themselves.

The lesson of Columbine is not only to rescue the wounded as soon as you can. It is not only to enter the school building with guns drawn and safeties off, to be ready. Policemen have an obligation to gather information and assess the situation as well as they can. That assessment takes a little time. You can gather a lot of information in sixty to ninety seconds. I would like to know how much time elapsed between the end of the policemen’s shouted warning to Jaime to drop the gun, and the first shot fired at him. I expect you would measure the elapsed time in seconds, and that the number of seconds would be in single digits.

What has happened to police officers who are calm and courageous? Does the militarization of police forces mean they cannot fulfill their community functions any longer? Does it mean that their main function now is to intimidate, injure and kill? When you see the security officer pepper spray students at UC Davis, his matter-of-fact behavior as he walks down the row of peaceful young people is astonishing. The policemen at Cummings found themselves in a confrontation with more danger, but the main lesson is equally disturbing: police act with unnecessary force, then justify their behavior afterwards.

In one moment, Jaime sees police officers rush into the hallway. It’s hard to hear what they say, as they’re shouting at once and the hallway has an echo. They have their guns drawn. What should I do?

A few moments later, Jaime lies on the floor, gunned down and dying. I wonder what the policemen said to Jaime as they approached him? I wonder if he could hear it.

Steven Greffenius is the author of Revolution on the Ground, available at Amazon, Barnes & Noble, Smashwords, and here at the The Jeffersonian.

1 thought on “Guns Drawn, Safeties Off, Ready to Kill”