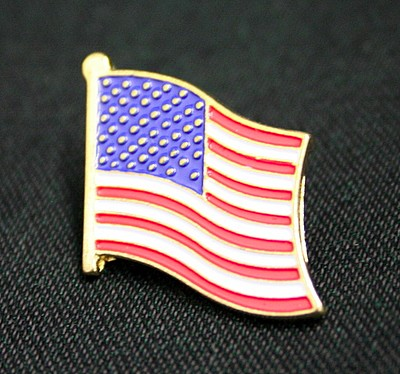 The pin is back. Do you remember President Obama wearing his flag pin so prominently during the middle of his term? I don’t. Now it features prominently in the photographs of him that appear in the media. Now the campaign season has begun, you see red, white and blue blazing on his lapel. He started wearing the pin during the 2008 campaign when journalists asked him why he didn’t wear one. Now we see it again – I suppose he doesn’t want some self-appointed member of the patriot police to ask him why it’s not there.

The pin might as well be a badge that says, “Screw You, The Establishment Owns Me.” Or it might say, “I Stand for Liberty, Justice, Freedom for All.” A third inscription might be, “Support Our Country, Vote for Me.” The first one would be the obvious truth, the second one would be an obvious lie, and the third one would be the campaign statement Obama actually wants to make.

I wonder how Obama feels when he puts that pin on. I do not doubt that he is a patriot in his own heart. The question is why he needs to tell people that on his lapel. George W. Bush began the practice of wearing this obnoxious pin not long after 9/11, when he plainly stated, “If you’re not with us, you’re against us.” The pin became the president’s way of saying, “And you better believe it.”

Now President Obama has continued the practice, as he has continued so many other post-9/11 innovations he inherited from his predecessor. If he were a strong leader, he would take that pin off in front of a pack of journalists, and tell them why he would no longer wear such a thing at their behest. He wouldn’t have to fling it at them. He could just set it aside quietly. His aides would make sure someone had a video camera there to record the event.

A quick check of the four Republican presidential candidates in the Florida primary election debate shows that Santorum, Romney, and Gingrich all sport lapel pins. Paul is the only one who does not. Good for him. We already know he’s the only honest candidate we have. The fact that he declines to wear that pin attests to that.

Remember that the flag symbolizes our country, not our government or its trappings. The flag flies from our ships and it flies over our military bases. That’s a reminder that our men and women in uniform ought to fight for our country.  Yet we have seen our armed forces become the tool of a crazed government that goes to war even when war makes our country less secure, not more so. We have seen our flag fly in places overseas where people hate us because we torture them and kill them. That is not what our flag is supposed to symbolize.

Here at home, the flag flies in front of government offices everywhere. It is so ubiquitous that it has become the government’s logo. Can you imagine what an insult that is, when a criminal government uses the symbol of our beloved country to market itself? Do they think they can violate the Constitution even more blatantly than they already do if only they keep their image brushed up? When governmental institutions and leaders have failed so utterly in their basic duties, the sight of our flag used as a marketing logo becomes one more assault on our hearts, and our hopes. Talk about alienation. It’s like a rapist prodding his victim to like him.

For now, we have to watch governmental institutions and officials wear the flag like some kind of laurel wreath. Perhaps they actually do regard it as a badge of honor. For us, living with the consequences of their incompetent, criminal acts, the practice of honoring themselves with this symbol has become obnoxious. If institutions and officials cannot act for our country, as we instructed them to do in our Constitution, they should not pretend they do. Every new travesty they come up with proves they act for themselves.

We love our country. We’re proud to be citizens of this republic. Our forebears built it; we built it. We want to pass it on in good shape. Within this American community, we tolerate government as a necessary evil. Governmental officials are servants we hire to do an unpleasant job. We expect them to do their jobs loyally. We like them or even love them because they do a good job, not because they stand for our country. We stand for our country.