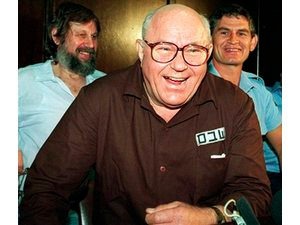 You see in this timeline that John Demjanjuk was fifty-seven years old when the United States government went after him. For the last thirty-four and a half years of his life – almost forty percent of it – Demjanjuk’s own government made him a scapegoat. A scapegoat in the Old Testament is a goat sent into the wilderness after the chief priest symbolically lays the sins of the people upon it (Leviticus 16). In current usage, we make scapegoats of individuals who carry the burden of other people’s wrongdoing. If Nazi hunters want someone to punish, give them what they want. The law says you can’t turn a United States citizen over to another country for trial? Revoke his citizenship. The Constitution says you cannot try the same person twice for the same offense? Cook up new charges, revoke his citizenship again, and turn him over to another country for another trial.

That is the story of John Demjanjuk. Citizenship gives you certain rights. In truth, God gives you certain rights – they belong to you because you are a person. Citizenship is the legal framework we use here on earth to protect natural rights. When you strip a person of his citizenship, you say, “Whatever rights you have from God, you’re on your own. We won’t protect you or your rights anymore. Go into the wilderness.” After John Demjanjuk lost his U. S. citizenship in 1977, he went into the wilderness and never came back.

The truly morbid denouement came in 2009, when the United States sent Demjanjuk off to Germany to stand trial a second time. At eighty-nine, dying of bone marrow disease and in a wheel chair, he flew to Germany to be convicted of 28,060 counts of accessory to murder. I suppose when you are a guard in a Nazi death camp, your crimes accumulate pretty quickly.

Don’t be flippant about all those prisoners who died, you say. I agree. Let’s remember the people who died in those death camps properly. I’ll tell you one way not to remember them: pull a retired automobile worker from his home and charge him with capital crimes on flimsy evidence. Sentence him to hang, reverse the sentence as carpenters build his gallows, then draw up new charges in the country that most needs to expiate its guilt and convict him on those.

How many must have thought, when he left the country again for a second trial in Germany, “Just leave the poor man alone.” Not, apparently, the people at the Los Angeles Times, whose headline today reads:

No doubt about it there: the man is guilty. He was charged, tried, and convicted. We have selected our goat, and the goat will die. How convenient for us that Demjanjuk’s name sounded so foreign, so evil. Ivan the Terrible could not have imagined a better name.

So many trials remind us that an accusation is a social act. We make the charge: the courts deliver it. We make our judgments: the courts execute them. The courts, for all their mahogany and procedural formality, for all of our efforts to remove them to legal realms beyond and above wretched emotions, still function as people’s courts where we make collective judgments. The twelve jury members stand in for all of us.

The difference for John Demjanjuk is that his trials and hearings spanned memories of the Holocaust on three continents, in the United States, Israel, and Germany. The charges he faced concerned the most horrible genocide ever perpetrated by one group of people against another. Israel stands forth as the one country of the three that recognized its error in sentencing Demjanjuk to death. Its Supreme Court decided that John Demjanjuk was not Ivan the Terrible. The United States and Germany, responding to some elemental need for expiation, decided that conscience required a second prosecution. The facts and the evidence did not require a second prosecution; the need to send our sins into the wilderness required it.

For all our faith in procedures, people who evaluate evidence for heinous crimes don’t agree in their judgments. Alfred Dreyfus, Ferdinando Sacco and Bartolomeo Vanzetti, Julius and Ethel Rosenburg, Lee Oswald, O. J. Simpson, and numerous people less famous have faced accusations, evidence and judgments in and out of court. We know one thing: people are passionate in their beliefs about guilt or innocence, and they don’t change their judgments easily. When we say, “Don’t talk about politics or religion in polite company,” we should add, “politics includes famous crimes!” Some beliefs are more durable than others. When sin and conscience coalesce in an accusation, we touch strong emotions. We don’t want our judgments to spring from these emotions, but they do.

So it was with John Demjanjuk. His long ordeal suggests that more people than not believed he was guilty. Three and a half decades is a long time: the emotions and accusations that carried him along such a tortuous stream must have been strong. Yet a lot of people thought he was innocent, or they suspended judgment. They believed that one trial was enough. Don’t put him through it again. Let him die in peace.

God gives us life, but he doesn’t let us choose how to die. I’m sure John Demjanjuk would have chosen to die with his family in Cleveland, not in a nursing home in Germany. I’m sure he would have chosen to live his last thirty-five years in peace. If you think he was guilty, you believe he deserved everything he got and more. If you believe he was innocent, or you’re not sure, you think his country did not give him the protection he should have had. His country should have honored his rights of citizenship. It should have protected him from double jeopardy. It should not have shipped him off for another trial in Germany because the first set of charges in Israel didn’t stick.

John Demjanjuk’s ordeal is over now, but his epitaph sticks because his country turned its back:

~~~~~~~~~~~~~~~~~~~~~~~~~~
Postscript: Check the photographs of John Demjanjuk that appear when you search his name in Google images. Almost every photograph is unflattering. Every one, except for the two I’ve included here. The public images match the epitaph.