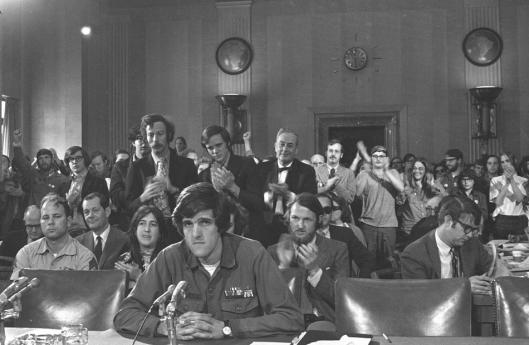 Seth Lipsky wrote a column in the Wall Street Journal a couple of days ago titled John Kerry, Secretary of What? It argues that John Kerry is unqualified to be Secretary of State or Secretary of Defense because he testified to atrocities and war crimes committed by soldiers in Vietnam. Lipsky suggests that someone who vilifies veterans, or causes others to vilify them, is himself worthy of vilification. He speaks approvingly of John O’Neill, who led the Swiftboat Veterans for Truth in the 2004 presidential campaign:

Mr. O’Neill and fellow officers who served on Swift Boats in the war in Vietnam’s Mekong Delta torpedoed Mr. Kerry’s campaign for president in 2004. The Swift Vets exposed his libels against American GIs and debunked his claims to heroism in the Mekong Delta.

Then Lipsky quotes from Kerry’s testimony before the Senate Foreign Relations Committee in 1971. Kerry reported what veterans confessed about their actions in Vietnam, where they

had personally raped, cut off ears, cut off heads, taped wires from portable telephones to human genitals and turned up the power, cut off limbs, blown up bodies, randomly shot at civilians, razed villages in fashion reminiscent of Genghis Khan, shot cattle and dogs for fun, poisoned food stocks, and generally ravaged the countryside of South Vietnam in addition to the normal ravage of war, and the normal and very particular ravaging which is done by the applied bombing power of this country.

Lipsky then suggests that because no one prosecuted the veterans for these crimes, they did not happen. That is, the veterans had confessed to crimes they had not committed. Ask yourself how likely that is: your country drafts you to fight a nasty land war in the villages, rice paddies, and jungles of Vietnam. You witness what we know happens during a war. When you return home, you testify to atrocious acts you committed while you were overseas, and you lie about it! These soldiers were not bragging. Like John Kerry, they were angry their country had put them in a hellish place where atrocious activity had become commonplace, with little to distinguish among normal ravages of war, war crimes, and memories of things they had done.

Lipsky concedes that a few bad apples, as we call them now, may have committed war crimes. In fact, he generously places Kerry in that group, citing Kerry’s own testimony:

There are all kinds of atrocities, and I would have to say that, yes, yes, I committed the same kind of atrocities as thousands of other soldiers have committed in that I took part in shootings in free-fire zones. I conducted harassment and interdiction fire. I used 50-caliber machine guns, which we were granted and ordered to use, which were our only weapon against people. I took part in search and destroy missions, in the burning of villages.

When Kerry refers to a free fire zone, he means the rules of engagement permit you to shoot anything that moves, including women and children. A military court prosecuted Lt. Calley for the massacre at My Lai not because his actions there had a different result from military actions in innumerable other villages. It prosecuted him because his company was more deliberate than most, and because he and his men murdered so many people. After Seymour Hersh reported the massacre in the States, the military had to prosecute him.

Imagine what Vietnam veterans encountered when they returned home. On one side were anti-war protesters who actually did vilify returning vets as war criminals – behavior that disgraced the peace movement, not the returning soldiers. On the other side, returning vets encountered so many people who did not even want do know what happened in Vietnam. They couldn’t comprehend it. Along comes John Kerry, a decorated officer, angry that his government, in a paroxysm of brutality and stupidity, sends thousands of his generation to die in a place they don’t care about. He tries to tell people, in government and out, what is happening over there. He vilifies the war, not the people forced to fight in it. He honestly confesses that he participated in the same hell as everyone else.

When John Kerry reports in 1971 that destroying villages and their civilian inhabitants was U. S. policy, he tells the truth. These ravages of war were not the result of a few bad apples. Lipsky neither acknowledges nor cares that history supports John Kerry. The evidence did not support John O’Neill when he campaigned to discredit Kerry in 1971; the evidence had not changed when O’Neill mounted the same campaign in 2004. The Swift Boat Veterans for Truth demonstrated their hatred for Kerry when they launched a twisted campaign of falsehood against him. The Republicans would have disavowed the campaign in a second if they had an ounce of honor. They did not – George W. Bush and his corrupt propagandists stood by silently. At least John McCain, a fellow veteran, disavowed the swift boat veterans.

The swift boat veterans hated Kerry for his testimony, all the more because it was true. They hated him because they felt he made them look bad. Kerry’s goal was not to level accusations at his fellow soldiers. His goal when he returned from Vietnam was to end the war by telling people what was actually happening over there. The swift boat veterans never accused Kerry of lying in his testimony during the anti-war movement. They know he told the truth. Instead they denigrated his heroism, saying he did not deserve his medals. Somehow that stuck. I don’t know why, but it did.

The Vietnam war was born in lies, it matured in lies, and it ended in lies. We have still not acknowledged what we did there. When he returned from the war, Kerry told the truth about U. S. activities in Vietnam. We saw what happened to him in 2004 as a result. Eight years ago, too many people listened to John O’Neill and his dirty organization before they listened to John Kerry. This week, we still see Seth Lipsky use space in the Wall Street Journal to dishonor John Kerry for his testimony, more than forty years after Kerry’s honorable and heroic service to his country.

We’ve all heard someone say at one time or another, “We have to put the Vietnam war and its divisions behind us. Otherwise its wounds will never heal.” It’s a platitude. First acknowledge the truth. Then seek reconciliation.