Every time I hear something new about martial law in Boston on Friday, April 19, the picture gets worse. The uniformed officers with automatic weapons would knock on people’s doors. When someone answered, they would order the residents out at gunpoint, so they could search for the fugitive. That’s called sheltering in place! If you force people to stay inside, you can order residents about when you send your commandos door to door. Don’t forget Boston Strong was grateful for the assist.

Here’s an interesting footnote to the language we now use in our commando state.  The day after the Marathon bombings, Governor Deval Patrick announced full cooperation among all levels of government to find the bombers. Federal, state, and local law enforcement agencies would all contribute people and resources, they would all share information, they would act together to catch whoever was responsible.

Three days later, an invasion force, with armor, occupies the city. That is not an exaggeration. The force arrives with helicopters, tanks, trucks, and enough armament to fight a major battle. Where did so many people come from? Where did they get all that equipment? No government can mobilize assets like that without extensive planning. That was the hidden meaning of Governor Patrick’s announcement on Tuesday, April 16, that all levels of government would cooperate.  He granted permission to all those forces to come to our city and occupy it.

News reports during the day focused on the manhunt, not on the occupation. We didn’t find out where the goons came from. Some looked like traditional national guardsmen, in olive drab. Boston police were out in full militarized force, of course. Others must have been from the Department of Homeland Security. Given the reporting, we don’t find out where the helicopters, the tanks, and the trucks filled up with gas. We don’t know what arsenals and ammunition depots supplied the weapons. All we know is that the forces appeared Friday morning. They enforced the order to stay off the streets. Then the forces departed that evening, at suppertime, before local police apprehended their fugitive. What a show of overwhelming intimidation. Residents said they were grateful for the protection in a time of danger.

Times past, national guardsmen wore insignia, policemen looked like the guy in Make Way for Ducklings, and you could generally identify law enforcement officers by their uniforms. Now it’s a mix. Commandos arrive like monsters from some Orwellian dystopia. They arrive in black uniforms, bulletproof vests and helmets, carry all manner of sophisticated military gear, and they just look frightening. That’s the idea: you show force to intimidate, to threaten, and to control. You don’t want to use your guns or your tear gas. You want people to obey you out of fear and gratitude: coerced trust.

We have gone so far down this path that it seems almost pitiful and puny to point out that we taxpayers paid for the uniforms, the gasoline, the bullets, and the tanks. We citizens employ the troops who occupy our cities, we pay their salaries and keep them well equipped. Yet when they show up, we don’t know where they came from. When they depart, we don’t know where they go. All we know is that the governor gave them permission to invade our neighborhoods. We’re grateful they did, because we want protection from the enemy without. 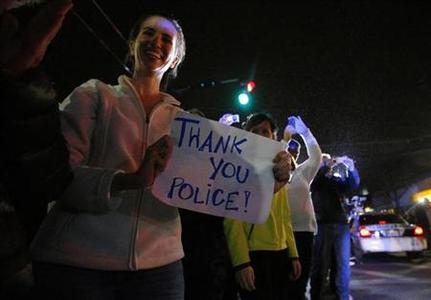