I ran across a video about a strip search and police brutality today that was so disturbing, I couldn’t post it to The Jeffersonian. I watched something gruesome in a video years ago, and I thought, “No, I’m not going to do that again.” This film doesn’t show blood, but in its way the story it tells is jarring and depressing. It produces a feeling of anxiety. Images like that stay in your memory and return when you don’t want them to, like a nightmare from war. Images of brutality tell you why we call some things obscene. I posted the video to Next Free Voice. Click here to see the full post at 2012 The Big Picture. The picture below is not from the video, but it evokes a similar atmosphere.

I wanted to write about the story the video tells, and why it’s disturbing, but I’ve been called away. Read the post at The Big Picture, anyway. Here is what one surmises from the news story: the police took the video and gave it to the victim’s attorney to show that they followed their procedures. They admit no wrongdoing in the case. By their silence, and release of the video, they defend their behavior as necessary and proper. At least they didn’t keep evidence of their behavior secret.

The film makes clear that police aim not at protection or law enforcement, but at humiliation, control, and fear. The prison guards want you to know what you are up against.

Immigration and the Tea Party

Advice to the Tea Party: avoid the immigration issue. Neither the question nor the aims are yours; the issue does not take you anywhere. The question does not concern taxes or spending. It does not concerrn the Constitution, or civil liberties, or governmental overreach, or anything that led to the founding of the Tea Party movement in the spring of 2009. Immigration activism is a Republican hobby horse, and a Trojan horse for your movement.

How many people think Mitt Romney never had a good chance at the White House? The same number of people who think he was nuts to become an anti-immigration crusader during the primaries to win the Republican nomination for president. Self-deportation? You know what that means, don’t you? Make life in the United States so miserable that people from other countries will leave. Jews self-deported from Germany in the 1930s. Boat people still self-deport from Indochina, decades after the war there ended. People tried to self-deport from East Germany during the Cold War, but the Berlin Wall proved an effective impediment. The wall we’re building on our border with Mexico could prove an impediment to self-deportation, too. What will anti-immigrant crusaders say to that? 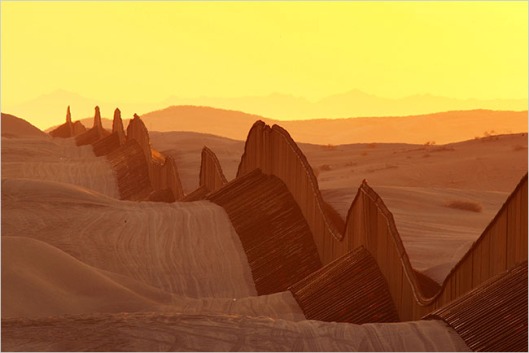 Immigration and border security are narrow issues that affect particular areas of four states: California, Arizona, New Mexico, and Texas. For some reason, Arizona is the state most worked up about the matter. The other three states don’t have Sheriff Joe. When Mexico’s drug wars spill over into Arizona, I can see why Arizonans want to do something. A wall, however wrong-headed, seems like a good start to people who want to see something done. Drug gangs, however, are not an immigration issue. They are an organized crime issue, just as criminal gangs became an issue during Prohibition. You don’t want to confuse the consequences of anti-drug measures with the consequences of immigration. When Arizonans point to drug violence as a reason for immigration restrictions, they show just how confused a person’s thinking can become.

Meantime, Tea Party activists don’t want to become entangled in this imbroglio. It only benefits Sheriff Joe. As Huck Finn would say, the Tea Party won’t get no show from this issue. It’ll certainly distract from the movement’s core goals. Once again, the Tea Party may have decided to align itself with the Republican party in order to elect sympathetic candidates to office, but they don’t need to run over the cliff with the Republicans, too. Let Republicans self-destruct if they like. They sound plain ugly on the immigration issue, as Romney did during the primaries. They can’t seem to help themselves. The Tea Party wants to keep its eyes on the constitutional heights, not the Republicans’ rotten hope that immigrants will want to self-deport.

If you create an environment intended to make your neighbor self-deport, someday another neighbor will do the same thing to you. What will you do then?

How fast can you climb the border fence?