On the other side, suppose an honest person testifies without swearing an oath to tell the truth. Does the omission make it more likely the witness will give dishonest testimony? If the audience knows the witness as an honest person, will they regard the testimony as less reliable because the witness did not swear an oath?

These questions come up because Keith Alexander and James Clapper are back on Capitol Hill to answer allegations from our allies in Europe that the United States conducts illegitimate surveillance activities to collect information on their citizens. I don’t know why these two even bother to go before congressional committees anymore. What waste of time. They may feel like they are doing their jobs, but for us, it’s another day of gagging on government’s smoke.

I also find myself wondering if Alexander and Clapper testify before Congress under oath. Whether they do or not, you have to ask whether it matters. Why should we care whether liars take an oath to tell the truth? Why should we care whether honest people take an oath not to lie? A liar is untrustworthy, and an honest person is worthy of trust. Oaths do not change those judgments.

Here’s something to remember. Alexander and Clapper kept secrets they should not have kept. They broke the law – that is, they violated the Constitution – and they did it in secret. Criminals crave secrecy, and people who operate in secret in order to hide their crimes are inherently dishonest. You cannot trust them, even before they begin to speak. Edward Snowden exposed Alexander and Clapper as liars. They say he belongs in jail because he’s a spy. In fact, they want him in jail because he told the truth about what they do.

Edward Snowden and Dorothy have at it – not with each other, of course

Even more troubling, Alexander, Clapper and others have operated within the norms of the intelligence community for so long, they cannot imagine how they appear to people outside of that community. They testify, they explain, they defend, they attack. Yet nothing they say makes them trustworthy. Their destruction unfolds in public. Edward Snowden threw water on the Wicked Witch of the West. 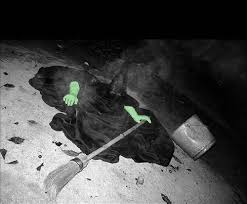 Halloween for the NSA