Do you think politics will continue its invasive entry into all the formerly neutral places we turn? We expect marketing messages to hit all of our senses, unless we are asleep. We accept that as one price of a free market. Politics used to be an activity where you could opt out a little more readily.

What prompts these thoughts? WordPress.com put a bright rainbow banner at the top of its editing and site admninistration pages, to celebrate the Supreme Court decision that permits gay marriages:

WordPress is a business site. It is open to people of all persuasions, no matter what they have to say. Moreover, people pay WordPress a range of fees for site services. For instance, I pay WordPress a modest fee to host the domain for The Jeffersonian.

I like WordPress for a lot of reasons. One of them is the distraction free interface. Actually, WordPress has two interfaces, a new one and an older one. The new one is inferior, partly because it contains more distractions. The new interface is where WordPress’s administrators chose to place their distracting rainbow banner.

WordPress pushes you toward the new interface as its default, but I return to the older one by every means I can. I know there I can focus on my thoughts, with fewer gizmos. Now, along with all the other things they thought were improvements, they want to send me political messages. Interestingly, the rainbow banner does not appear at the old interface.

Suppose WordPress had indicated its disapproval of the Supreme Court’s decision. Suppose it had decorated administrative pages at its site with an unsubtle pushback against the gay rights movement: 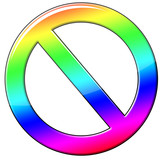 In that case, audience response would have been immediate and merciless. Via social media, people would have tried to shut WordPress down. Their objections would not have criticized WordPress for posting a symbol that distracts writers who want to go about their business. They would have objected on political grounds.

So why is it alright to bring political symbols into your business site when you take a safe, popular stance? Can you bring your politics wherever you like, as long as other people approve of what you say?

We don’t like it when political shysters appropriate the American flag as a symbol to enhance their credibility. Fortunately those lapel pins aren’t so visible anymore, but wait till the 2016 election. We all want to think our leaders are patriotic – sometimes they are – but we know what most of them will do if they must choose between patriotism and their own interests. Everyone knows politicians and political parties look out for themselves, not for their country. That’s what cronyism means.

For businesses, we expect them to look out for themselves, and for their customers. As their customers, we want them to make a profit, because we know they’ll profit if they serve us well. We certainly don’t expect businesses to push their way into questions like the legal definition of marriage. Even the law firm that appealed the legality of same-sex marriage to the Supreme Court would not put a distracting rainbow banner on its website.

WordPress markets its services prominently and relentlessly at its site. These offers are a little distracting, but I’m used to them now, and of course I want WordPress to have a successful sales operation. If WordPress fails, my blog host goes away. They give me good service in return for my annual subscription.

I do not want to become accustomed to political messages and symbols when I go anywhere to do business. How would activists from any quarter react if WalMart opposed, or supported, the Affordable Care Act? If I go to a gay bar, I expect to see some celebration about Friday’s Supreme Court decision. If I go to a website where I have conducted business in a neutral environment for half a decade and more, I do not expect political messages of any type. They elicit an immediate, negative reaction, and prompt me to write posts like this one.

I don’t need to add that my reaction to WordPress’s mistake is not related to my thoughts about gay marriage or gay rights. You can expect, given The Jeffersonian‘s position on other political matters, that the Supreme Court’s decision does not disagree with me, as a legal opinion. On the other side, I have come to think that the treatment gay rights advocates deal to their opponents is unwarranted, troublesome, and vicious. The more gay rights advance, the more advocates seek to crush those who disagree with their aims. One writer called them sore winners.

Celebration for winners serves a much healthier purpose. Advocates of gay rights do not need to suppress voices of people who disagree. Their success never depended on the arousal of cyber-mobs, and it certainly does not depend on that now. The Court’s decision lends momentum to ideas about how we’ll all benefit from a community that protects freedom to wed anyone we like. Leaders ought to articulate a hopeful vision.

Attacks on people who do not share that hopeful vision have been ugly. Respected civil rights leaders have always celebrated love, not hate or animosity. Nelson Mandela always preached dignity and unity for all South Africans. Martin Luther King never attacked the Ku Klux Klan the way gay rights advocates have attacked their opponents.

Gay rights advocates have sought not only legal rights, but social acceptance. Advocates out to accept, graciously, people who unsuccessfully resisted their aims. Politics is a hard game, but winners can afford to be gracious.

I tried hard hard to find a place at WordPress’s site where I could write a message with straight feedback about bringing politics into a neutral business environment. They generally offer good technical support, but they do not have a Contact Us link for open-ended comments. I suppose this post was meant to be.