Dick Cheney has been promoting his new book, Why Everything I Did in Office Was Right. He reminds me of those characters in Barbara Tuchman’s The March of Folly. She documents four cases of incomprehnsible stupidity on the part of political and religious leaders through history. She notes a common thread in these stories: the people whose poor judgment led them to make such catastrophic mistakes also do not recognize what they have done. Fatal self-regard infects their vision. It makes them incapable of understanding the situation they are in, or the consequences of their misdirected policies.

Who can explain this man’s mind and heart?

I’ll use a well worn comparison to assess the damage Cheney and Bush did when they attacked Iraq. When you are careless with fire, the destruction that follows if the fire burns out of control can be terrible. Starting a war in Iraq is like igniting a fire with large, open reservoirs of gasoline everywhere, in the Levant, and elsewhere from Tunisia to Pakistan. We have seen what happens when these reservoirs take flame, one after another. A world war ensues.

No one can underestimate the power of example, for good or for evil. For all the mistakes the United States made, and for all the conflicts it pursued after the US and its allies defeated Germany and Japan, people and countries generally saw the United States as a source of peace in the world. We didn’t act that way all the time, but we claimed the role of the superpower who could maintain reasonable order around the globe. Pax Americana was an ideal, and we had enough followers committed to the ideal that conflicts, if frequent, remained limited.

We dropped that ideal when we went to war in Iraq. The world’s peacekeeper became the world’s aggressor. Just as police in our cities become blatant aggressors and murderers, who break the law and initiate violence, we did the same kind of thing in a part of the world where hatred, fear, revenge, resentment, rivalry, fiercely ardent feuds, religious animosity, tyranny and corrupt national institutions all combine to create an extremely volatile battleground.

All of these conditions make individuals and groups willing, even eager to fight. When the Great Satan swaggers in as the new sheriff in Baghdad and Ramadi, do you think peace will follow? No. When the United States drops its role of trying to keep conflicts in check, and instead tries to conquer a pivotal piece of territory, it unleashes all the fiends and evil spirits that war has at its command. During Pax Americana, it did not matter that much whether the US used fear – deterrence – or diplomacy, charms of attraction, soft power, benevolent garrisons and grand fleets, hopeful examples of freedom and democracy, and generous foreign aid to build frameworks of peace around the world. The array of tools and impressive symbols of power, plus a somewhat fitful willingness to lead enabled victory in a long cold war. Nations looked around and saw more calm than they were accustomed to.

Then the very leader responsible for order becomes a fearful aggressor, not interested in maintaining peace at all. Using 9/11 as its excuse, the world’s foremost power becomes violent, unpredictable, and obscene: like a policeman who whips out his pistol and shoots at anything that moves. With an example like that, and given the suppressed conflicts that exist in so many regions, can we be surprised when Dick Cheney’s lit match results in a world war?

Is Dick Cheney directly responsible for drowned children washing up on Mediterranean beaches? No, he is not. Is he responsible for initiating warfare in a nearby country, a war that spread to Syria and has created so many refugees the world is entirely unprepared to handle them? Yes, he is. He carelessly and foolishly kindled a powerful fire in an environment entirely out of his control.

So many people told him at the time that his actions would cause untold damage and destruction. He scoffed at them. He scorned them and responded with hate-filled diatribes against the people who warned him that the war he advocated was foolish, ill-advised, and dangerous. Now that events have proven his critics correct, he scoffs at them still. Moreover, he blames every bad outcome of his misconceived plans on them!

Even if you are careless with fire during the dry season out west, people can’t blame you for the multiple conditions that make a fire burn uncontrollably. You can’t do anything about scant rainfall, dry winds, accumulation of burnable material on the ground, lightning strikes across the ridge, shortage of fire-fighting resources, or the proximity of people’s houses and communities. 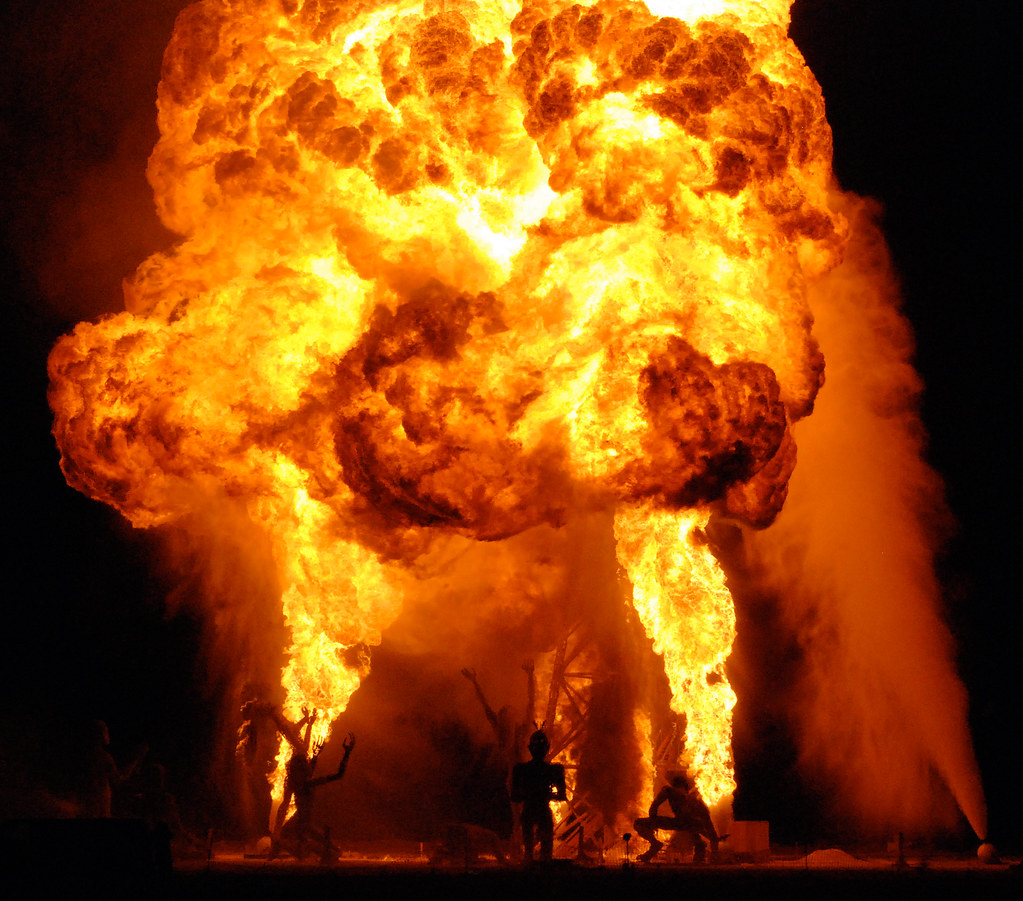 All of these conditions count as reasons to keep fires in check: don’t do anything that could possibly lead to a fire burning out of control. Starting a war is more than dropping a hot match too close to dry tinder. Starting a war, as we did in Iraq in 2003, is like throwing a fire bomb into a valley full of dead brush, or into a lake of gasoline. Starting a war of aggression – a war of choice, people called it! – is almost always an incomprehensible act of folly, because the fires you unleash return to destroy you.

Only twelve years after it won the Cold War, the United States started a conflict that resulted in a long predicted and feared third world war. No one predicted in the 1990s that attacks on New York City and elsewhere would become a pretext for that war, but that is what happened. Cheney said, long before 9/11, that the country needed a new Pearl Harbor to accomplish its aims overseas. An attack on the homeland would unify it for great accomplishments.

The nation had a new Pearl Harbor, but without the results he envisioned. Instead he has seen his country’s empire disintegrate around him. It has lost its cohesiveness domestically, and its powers of leadership abroad have disappeared. The Romans used to warn, “Sic transit gloria mundi”: “All glory is fleeting,” or “Thus passes the glory of the world.” If Dick Cheney were more discerning, he would understand the blessings of world leadership were the glory of our world. They soon pass, especially if you are foolish and incompetent.

Skepticism about the true nature of the 9/11 attacks arose in the United States quickly enough. The same skepticism deeply affected perceptions of American aggression abroad: in Europe, the Middle East, and elsewhere. Widespread sympathy immediately after 9/11 soon yielded to more cynical judgments as Bush and Cheney unrolled their government’s response to the attacks.

For more arguments about the nature of the 9/11 attacks, check The Jeffersonian‘s posts in the category Infamy. See also David Ray Griffin’s book, The New Pearl Harbor, below.