These developments occur while Kerry pushes a peace agreement with Russia in Munich. When Russia goes to war against Turkey and Saudi Arabia, will the U. S. at last see the conflict in Syria as one piece of a world war? I doubt it, but the United States’ limited vision does not alter what has actually happened since Iraq in 2003, and the Egyptian revolution in 2011. Remember Chicken Little’s warnings about something about to fall? You could say the U. S. is the anti-Chicken Little: no matter how bad things become, Washington is ready for a little more of that old time diplomacy. 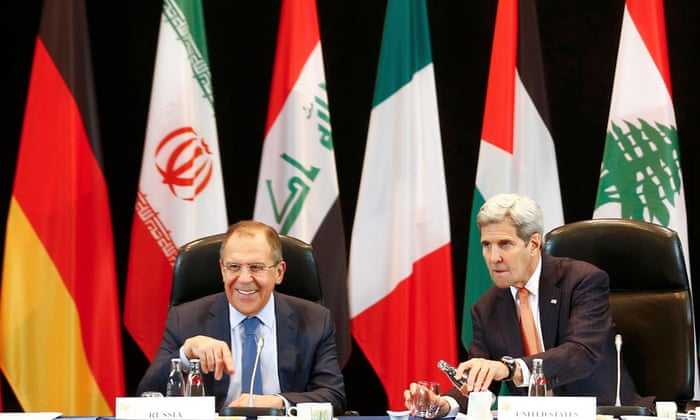 Even if you have given up hope for Washington’s ability to respond realistically to the wars it starts, you still have to ask, what if Putin succeeds in the Middle East, as he has succeeded, gradually, in Ukraine? What does the United States do then? More sanctions? More consultations?

I’m not saying the U. S. should go to war against Russia to defend its allies and defeat its enemies across the Middle East. That would compound the catastrophes we have already caused. What’s really disturbing is that we don’t seem to have any plan at all, any more than we did in 2003 when we started the avalanche of destruction we witness now.

To complement our planless, meandering conduct, we have demonstrated no ability to anticipate what our opponents will do. Gotterdammerung befalls an entire civilization, from Islamabad to Tunis, and we spectate like a world power that has season tickets. Mosul falls in a day? Oh gee, that’s a surprise. What happens next? Crimea falls in less than a week? Where did that come from? We have raised flat-footedness to a new standard. Here, hit me on the chin again. Well actually, you can’t hit me on the chin, because I’m in the ringside seats.

What do we do when Aleppo falls, with Russian forces active right on Turkey’s border? Do we say gosh, that wasn’t good? Washington assembles the coalition to talk about what we should do. Then Secretary Kerry can call for more peace talks, about the most futile activity one can imagine right now. Diplomacy is a front for failure when you have no strategy or goals, and your main method of operation is to lecture your enemies.

Meantime, Putin’s Russia replaces the United States as the world’s premier power. It has done so with adroit deployment of military power, implied threats that may or may not be bluffs, and a willingness to take substantial risks. He has done it with hardly any loss of Russian life. We thought when the United States retired from the top spot, Peking would succeed Washington as the world’s respected hard guy. Instead we face an amazingly capable opponent we thought we defeated twenty-five years ago.

Back home, lead contenders for the White House have a solution. Donald Trump, asked what he’ll do about ISIS, retorts, “I would bomb the s— out of them.” Ted Cruz promises, “We will utterly destroy them. We will carpet bomb them into oblivion.” I suppose they both think that’s going to make us great again. I haven’t seen an actual plan anywhere. Let’s put Kerry and Trump in a room together with Putin, and see if they can come up with something. That would be a trip. President ‘yeah we have a problem here’ Obama may drop by occasionally to see how they’re doing.

Leadership and influence go together. Right now the United States has neither.

The Syrian War and the return of great power politics

What do we do now in Syria?