We seem to be closing in on some verb, or adjective precision here. Journalists have dropped the term ‘brokered convention’ to describe the proceedings in Cleveland, in favor of ‘contested convention’. The latter term is more accurate. It must have dawned on journalists that you can’t have a brokered convention without a broker. Whatever happens in Cleveland, you won’t see any brokers hanging about to offer their services. You may see people trying to round up delegates, you may see people who would like to be brokers, but you won’t see any people who actually function as brokers. A person who makes a deal to trade delegates for some other favor or benefit does not count.

Here’s an interesting video, reasonably well edited given that it appears thrown together:

It explains what the term ‘brokered convention’ means, without saying anything at all about who the brokers are, how they operate, who makes them brokers, or how they determine the convention’s outcome. The entire purpose of all these delegates coming together is to select a nominee, and the recording does not explain how brokers figure into that process. No wonder: they don’t exist. We may have had conventions in the past where they existed, but the Republican party of 2016 does not have brokers. They won’t appear from nowhere in the next three and a half months, either.

A contested convention is another matter. After Trump’s loss to Cruz in Wisconsin, the consensus commentary concludes that Trump probably cannot compile the 1,237 delegates required to win on the first ballot. If he does not, you have a contested convention. That means the leading candidates – Trump and Cruz in this case – enter a contest that the party must decide at the convention. The delegates will not go home before they select a nominee. If neither Cruz nor Trump gain fifty percent plus one, the delegates still have to pick someone. Thus the talk of white knight Paul Ryan, or some unnamed dark horse who is dark because no one knows who he or she is yet. 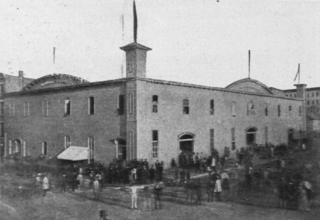 Rare photograph of the wooden frame “Wigwam” building specially designed and constructed for the 1860 Republican Convention in Chicago. 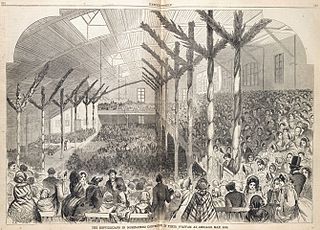 Drawing of the Wigwam interior during the 1860 nominating convention. Note the second story gallery and curved ceiling structure to allow for better acoustics.

Lincoln’s case is interesting, as William Seward of New York was the clear favorite going into the convention, but he did not have a majority on the first, second, or third ballots. Lincoln’s floor manager, Judge Davis, rounded up enough delegates for the third ballot to bring Lincoln a vote or two shy of the 233 required, and Lincoln won on the fourth ballot. Judge Davis was not a broker, however, and he did not have to go through a broker to win the nomination for his candidate.

The 1976 convention illustrates what might happen when two candidates share most of the delegates. Ford won on the first ballot, but during the summer months before the convention, both candidates worked hard to line up votes. Movement conservatives, as they were called, favored Reagan, but Ford had the advantages of incumbency. He won the first ballot by 112 votes.

So we have the question on everyone’s mind, what happens if The Donald comes into Cleveland a couple dozen votes shy? He and his team have shown no indication they have the political skill to outfight Cruz and his team for delegates, either on the floor, or in the weeks that precede the meeting. The only scenario that holds any hope for establishment Republicans is to deny Trump on the first ballot, by more than a few dozen delegates if they can, then crush him on the second vote, when delegates are no longer bound. Trump’s supporters won’t forget the lead he held going in, but other Republicans will. Trump’s main job is to prevent a two-ballot, decisive defeat.

The closer we come to the convention, the more analysis we’ll see. So far the Washington Post has published a fair amount of reasonable discussion. FiveThirtyEight is good with numbers, as well as prognostication based on numbers. You can count on one thing, whatever the pollsters and statisticians say: the person who leaves Cleveland with the Republican nomination won’t owe anything to a broker. He will, however, need to send thank you notes to the delegates who voted for him.

Wisconsin was terrible for Donald Trump. Except for this one silver lining.