Reporters seem to love apologies. They ask people for apologies every chance they have. Often the unfortunate target of their questions gives them what they want. Apparently apologies are newsworthy, so they fish for them, badger for them: “Don’t you think you owe the American people…?”

Yesterday, they asked Chelsea Manning if she didn’t want to apologize for the biggest document dump in the nation’s history. She’s three weeks out of prison after serving seven years, much of it in solitary. The reporters press their usual invitation to admit mistakes and express regret. Let’s show some remorse here! Don’t you want to apologize to the American people for betraying their trust in you? Isn’t that why you went to prison in the first place?

Thankfully, Manning stood her ground. She assumed responsibility for her action, but she had nothing to apologize for. She was clear about her reasons for releasing the documents at the time she did it, and she stands by those reasons now. That the national security state made an example of her shows how much it feels threatened by people with courage to expose the truth about its activities. 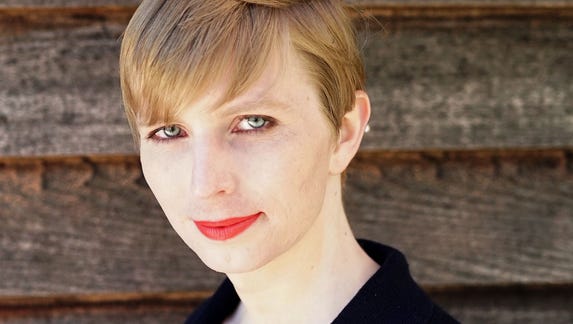 Manning does not suggest it, but perhaps the American people owe her an apology, and an expression of gratitude besides. Without Chelsea Manning, we have no Edward Snowden. With no Manning and Snowden, the national security state cruises along, conducting its business extralegally, as it likes to do. Manning set the example that made the national security state vulnerable.

I have a friend who testified today at a hearing for Massachusetts’ Safe Communities Act. The main idea behind this legislation is non-cooperation with federal authorities when they undertake extralegal immigration enforcement activities. The act is modest in its aims, to protect vulnerable people from mistreatment because of their immigration status, but I see it as a call to civil resistance.

Active groups ask local officials not to cooperate with federal immigration officials. An intensified campaign against so-called illegals leads officials from Immigration and Customs Enforcement to check up on people with foreign names to see if they have the right papers. If they don’t, they go to a detention center, where they wait for deportation. For their families, they disappear. To avoid arrest, immigrants essentially have to go underground.

Support these efforts to help members of our communities. You can learn more at these sites:

David Frum has two good articles in the Atlantic today. Here’s one on Comey and Trump:

I always kind of wondered what Rome, the city was like as its power slipped away. Now modern communications give us a seat at the fifty-yard line, for a modern version of disintegration in a great power’s capital. Officials who appeared so smug fifteen years ago – George W. Bush and Richard Cheney come to mind – don’t appear so self-confident or powerful anymore. Their epic dishonesty, criminality, and incompetence brought the house down, as if they were the Bear Stearns of Pennsylvania Avenue.  Now everyone’s a rumor monger or a wannabe.

This week’s New Yorker cover compares Trump to the Charlie Chaplin character in Modern Times. DC’s machinery is about to eat him up. I’d say the scary clown is more relevant. Already last summer, during the big clown scare, people worried that someone in a clown costume would snatch their children. Now we have a smirking, orange haired oaf who grabs pussies in the White House, and we want to know whether we charge him for obstruction of justice?

What do you think about your country’s future now? Do you tell your children that President Trump will come get them if they don’t behave? Better not, they may melt down in fear and anguish before they reach their twelfth birthday. Perhaps the clown scare fears and insecurity about the country’s future are not connected,  but these passing hysterias are notable nevertheless. We have a clownish performer who brays about his greatness in the executive mansion, but he just seems like a jackass to me. He may belong in a circus, or a reality show about scary bosses, but underneath he’s just a jackass. What a combination.

Many Republicans and establishment types outside the party still want him, even expect him to act like a president. People wanted Caligula to act like an emperor, too.