If you had any doubts about where our own Department of Justice stands on matters of free speech, see this photograph of Attorney General William Barr speaking at a so-called workshop on Section 230: 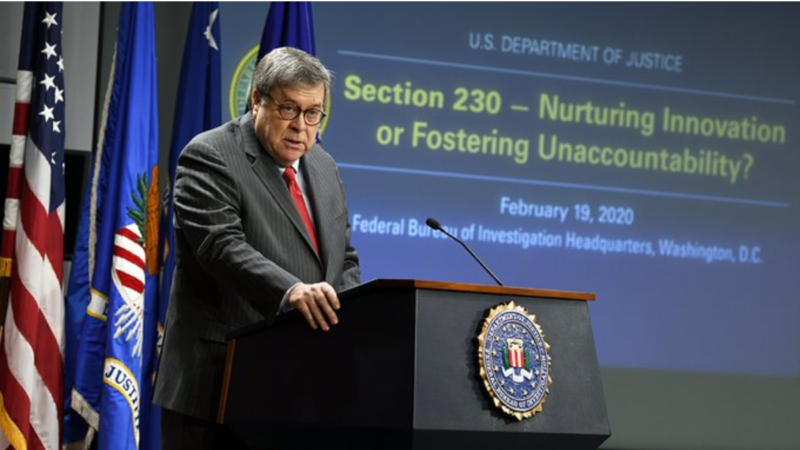 I say so-called because workshops suggest neutrality about the subject matter. The Department of Justice and the FBI, however, do not deal in neutrality, or in justice. They deal in surveillance, so if internet companies deny investigators access to encrypted information the department would like to have, those business firms have somehow become unaccountable. As Attorney General Barr said in his speech:

We must remember that the goal of firms is to maximize profit, while the mission of government is to protect American citizens and society.

He even added that civil lawsuits against technology companies large and small could “work hand-in-hand with the departement’s law enforcement efforts.” You cannot state the matter more plainly: if you do not give us information we want, if you do not accede to lawsuits that make you responsible for everything your platform publishes, you are unaccountable.

It must drive the feds nuts that they cannot just open people’s mail anymore, or listen to their conversations via microphones and wiretaps. People can now communicate via channels that powerfully encrypt every packet of data, which lets people say what they like without fear of arrest. If your concept of governance rests on watching over the herd, digital communications frustrate you. The herd slips through the gate to the wild blue.

The comparison is not so far fetched, either. Section 230 protects the internet as we have known it. It guarantees that people can say what they like in this digital space, on neutral platforms, as long as they do not violate already existing laws about threats of violence and other impermissible speech. It is like the First Amendment for the digital commons, though large companies have by now appropriated large chunks of the commons. That does not change our need to protect everyone’s participation, on terms that do not flow from whoever happens to hold power in Washington.

William Barr and the Federal Bureau of Investigation dress themselves up in sheep’s clothing, or in grandma’s cap and kerchief. They want you to believe you can help them, that you ought to help them. Plainly they do not want to protect society, or enforce laws for society’s benefit. They want to dominate society and intimidate citizens. Access to private information helps them do that.

Newspaper Lobbyists and Encryption Foes Join the Chorus Against Section 230