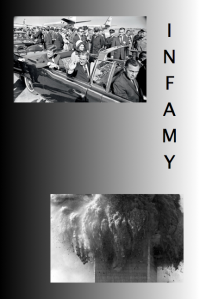 My ambition for Infamy was pretty modest at the beginning. Until 2009 or so, I’d had what most would call a passing interest in the conspiracy literature about what happened in Dallas on November 22, 1963. About ten years before, I had read Gerald Posner’s Case Closed, and didn’t find much reason to change my faith in Warren’s twenty-six volumes. The fact that Posner’s book was the only one I read tells you something.

Then Douglass’s book came out, and Talbot’s. I guess you just have to be ready to change your mind when the occasion arises. That is, the mind opens to new evidence when it is ready. Douglass’s ability to tell a new story about the murder on Elm Street made the Warren Commission’s case appear extraordinarily weak. No narrative of of those terrible events comes close to Douglass’s. The job he does is so masterful, Douglass hardly pauses to mention the Warren Commission report. In the 1960s, it was the touchstone for truth and falsehood in the case. Given the good research of the first decade, Douglass didn’t need to waste his time with falsehood forty-five years later.

So I thought, not too long after reading Douglass’s book, we have the fiftieth anniversary of Kennedy’s death coming up in a couple of years. Why don’t I compile a list of books on the subject published during the last ten years, and compare those with the Kennedy literature that preceded the pre-anniversary decade? That would be a useful thing to do: if Douglass’s book was any indication, investigator’s were doing some good work as we neared the fifty year mark.

Then instead of more Kennedy literature, David Ray Griffin’s work comes into view. Another theologian! I’ll admit I was motivated at this point. The U. S. government had just passed off a global torture regime as a nothing-to-see-here event. It was business as usual, written up in standard operating procedures, the way dedicated public servants in the CIA like it. No one can fire you if you go by the book. The Justice Department even supplied legal memos to make everything okay. Meantime, the rest of the country starts to think, “If these guys torture people in public, what are they doing in secret?” Nothing’s the same after your dad shoots your mom in front of you.

Motivated or not, you didn’t need a brain to see the 9/11 Commission report met an even lower standard of quality than the Warren Commission report. That’s like telling someone who has dug a basement to go down a couple more floors. I started to write essays about 9/11 with the theme: we don’t have fifty years to find out what happened in Lower Manhattan, or Pennsylvania, or the Pentagon. We have to find out what happened sooner than that, because our republic can’t survive official dishonesty on this scale for another fifty years.

Before I knew it, I had essays about both crimes, and a discussion or summary of literature on Kennedy’s assassination seemed more remote, or less urgent. So Infamy grew into a comparison of the two crimes, and it integrated some good thinking about how we arrive at accuracy, truth, and persuasive accounts when we investigate political crimes, or evaluate evidence about them. Funny how writing books, like so many human endeavors, makes you have to explain, ‘one thing led to another.’

The problem was, given my interests and the way they evolved, the essays for Infamy did not fit so well together. They fell into three categories: 1) those primarily about Kennedy’s murder, 2) those primarily about 9/11, and 3) essays that discuss issues common to both crimes. I tried to organize them all within a framework that readers would readily perceive, but that did not work so well. So now perhaps the best alternative is to prepare three separate essays, one for each of the categories listed above.

Moreover, I still believe the bibliographic motives for the project back in 2011 are still worthwhile. That is true in three senses:

So those and other reasons exist for continuing work in this area. We all need to work together on these great matters of exposition. Research and writing are solitary activities, but we all build on previous accounts and earlier work. Read Infamy, to see if it doesn’t help you make your own contribution.