The disordered society is full of loyal patriots. ~ Lao Tzu

If your goals are legitimate, you do not need force to achieve them. That does not apply to self-defense, of course, but then the United States is not under attack. Why then does it use force and aggressive threats with friends, former friends, enemies, and soon-to-be enemies? You even have a situation where the president says, “Russia is our friend,” and the president of Russia says, “Relations with the United States have never been worse.”

To take an example of U. S. accusations coupled with threats of force, consider its response to explosions in the Gulf of Oman, which crippled two large tankers. Usually when saboteurs lay down explosives, then detonate them in order to damage their targets, they have a reason to keep their identities secret. That is what happened with these two acts of sabotage. No one claimed responsibility for them.

Let’s ask a strategic question to assess military elements of the dispute between Iran and the United States. Why would anyone want to go to war here? When I say here, I mean the territory from Syria and Iraq, all the way across Persia to Afghanistan. Alexander the Great died trying to conquer this stretch. The Eastern Roman Empire foundered and slowly perished there. In fact, one empire after another failed to accomplish anything of note in this part of the world: Indian, Byzantine, Ottoman, British, and Russian empires all met the same resolute resistance. All embarked with hopes of glory and wealth, returned sick, demoralized, and beaten.

Even the Persians failed, if you consider Iran’s current relations with its neighbors. Strong states with self-respect do not need to blow up tankers off their own shore. You have to wonder what motive Iran might have had for that kind of act. You also wonder why the United States did not bother to attribute a motive when it accused Iran of carrying out the attacks.

“We don’t want to conquer these territories,” say our strategic planners. “We don’t even care to subdue them. We merely want regime change.” Yes, we want someone friendly in power. Problem is, nothing makes citizens and patriots more upset than to see their leader in someone else’s pocket. That is what friendly means here: you care more about your relations with an external power than you do about your own people. For the people, the difference between a puppet and a traitor is a matter of nomenclature.

Let’s take the case of Hamid Karzai in Afghanistan. Couriers from the CIA brought suitcases of laundered cash to Afghanistan’s central bank in Kabul, for deposit only. Karzai could use the cash any way he liked, so he used the money well: to buy off opponents so they would not kill him, or overthrow him and then kill him. After all, two suicide bombers assassinated Burhanuddin Rabbani, Karzai’s predecessor, in his own home. Karzai could also ship substantial portions of cash to warlords in remote provinces, to keep those regions loosely tied to the capital.

It has happened again and again. Wherever we go, we try to install a friendly ruler. When we fail, as with Castro in Cuba, we normally realize a better outcome than when we succeed. We succeeded with regime change in Vietnam, Iran, Iraq, Guatemala, Chile, and other places before, during, and after the Cold War. Not one of these has been successful over time. We need a better strategy.

Is that our strategy in Iran? Do we aim to dominate the country? That is not realistic. Do we aim to teach them a lesson? What gain would come of that? We crave a friendly regime in Tehran, but no one can truly say a friendly regime would be better than the one we have. How would a regime like Shah 2.0 benefit the United States? We sought outposts of democracy and pluralism in Iraq and Afghanistan already. Look what we have. We cannot even call them failed states. They do not function as states at all.

With the tanker attacks, we have a casus belli. That’s convenient. From 1953 until 1979, Iranians wanted to humiliate the Great Satan because Satan conspired with Britain to overthrow Prime Minister Mossadegh. From 1979 until the present, the U. S. has wanted revenge for that humiliation. The fight has brewed for sixty-five years, seventy-five if you count the decade of conflict before 1953. Right now no one can tell you what it’s about. People will tell you, ‘nuclear weapons’, ‘oil’, ‘freedom of the seas’, or ‘threats to allies’. Everyone knows it’s bullshit.

We all liked Iran when our man the Shah sat his tail in Tehran. After the shah governed twenty-five years, using torture and all the other instruments of misrule, Ruhollah Khomeini and his Revolutionary Guards chased him out of the country. They said, “We’ve had enough. We don’t want a ruler who collects his paycheck from the CIA.” It’s actually more indirect than that. The Shah listens to the U. S government, and the U. S. government sends him weapons. That was international politics during the Cold War. Now Iran is a Russian ally.

Did you notice how quickly Mike Pompeo went on television to blame Iran for both tanker attacks? The main argument seems to be that only Iran has the capability to blow a hole in the side of a tanker, and only Iran would want to. Pompeo did not present forensic evidence of any kind, though later someone came up with a video someone else said was incriminating. At the scene, Iranian navy ships rescued crew members from one of the tankers. Did they do that to cover themselves?

Initially Pompeo made these accusations without even knowing whether the attackers used mines or torpedoes. Then it was mines, limpet mines to be precise. You have to check Wikipedia to learn what a limpet mine is. The rollout of news reminds you of Benghazi, where Washington flogged the idea that attackers who burned our consulate were enraged about an anti-Islamic video someone made on the west coast. We learned later the attackers were fed up with the CIA mucking around in their civil war.

I am not a reflexive conspiracy theorist in these matters. I always say, “Wait until the evidence is in.” Which, by the way, Pompeo did not do. Most would say that’s the main quality of a conspiracy theorist: you speak before you know what you’re talking about. That is not to say that conspiracy theorists always reach for the closest convenient explanation at hand, but that does seem to be Washington’s model in this case.

Eagerness to blame Iran has other consequences. Virtually no one outside of the United States believes us. We did not even wait to learn whether Saudi Arabia, Iran’s sworn enemy, would back us in this accusation. We did not wait to learn whether anyone in the gulf region wanted to lay down a preemptive charge like that. We just jumped in. Pompeo ought to remember the last time a secretary of state went on television to lay down dramatic accusations against Iran’s neighbor, Iraq. Colin Powell ended his distinguished career as Cheney’s lackey. What leads secretaries of state to throw away their hard-won respect?

Powell’s U. N. testimony came in the aftermath of 9/11 Perhaps he thought that trauma would win him forgiveness, if support for war against Iraq turned out mistaken. Powell allied himself with Bush, Cheney, Wolfowitz, Rumsfeld, Bolton, and their cadre of amazingly incompetent colleagues, only to find himself in service to a bunch of idiots. This group may have convinced enough people in the U. S. that a war with Iraq to bring down Hussein would be a jolly good idea, but they did not convince people abroad. Even our closest allies in NATO, except for Britain, said “No thanks.”

Now, our friends in the Middle East often seem ready to find malevolent maneuvering and fabulistic plots everywhere they look, but in fact skepticism about U. S. motives and actions extends far beyond that region. If you visit Europe, and talk with people there about what happened on 9/11, you will hear responses far different from those you commonly hear in this country. It would be an exaggeration to say that virtually no one believes the 9/11 Commission’s official account in other parts of the world, but not by much. People abroad do not buy Washington’s lies so readily. 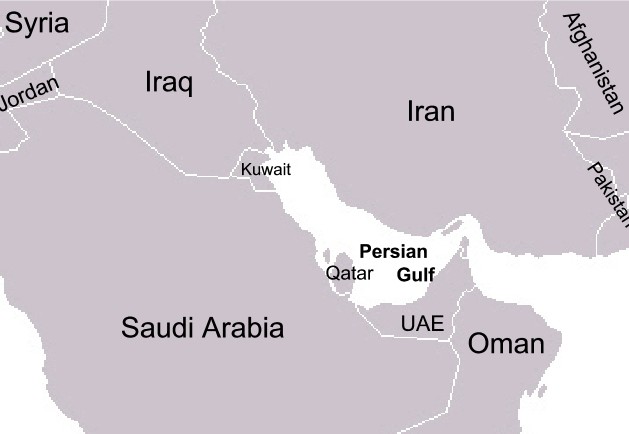 That’s the interesting thing about Pompeo’s presentation. He does not care what people abroad think of him. He steps onto the sound stage to make his case against Iran, without evidence. He believes in his heart that most Americans do not hold him in contempt. If he can persuade a sizable portion of American adults that Iran deserves holy hell because Iran declares itself our enemy, who will question him? Certainly not the people over at the Pentagon, who appear to think war with Iran would shake the cobwebs out, just as jolly good as going to war with Iraq. John Bolton tells Congress, naturally using different words: “What can go wrong?”

Meantime, the populace in Iran thinks, “Allah almighty, Satan thinks it can pull off another false flag attack, and go to war with it. Why did we not see this coming?” It actually does not matter whether the U. S. undertook a false flag attack or not: what matters is that large numbers of people in Iran think something is fishy. Mohammad Javad Zarif, Iran’s foreign minister, said after Thursday’s attacks, “Suspicious doesn’t begin to describe what likely transpired this morning.”

Do you think people in Iran listen to Pompeo, or Zarif? Where do people in Saudi Arabia,  Turkey, and Russia find their news? They do not listen to Mike Pompeo, I can tell you that. Do diplomats, military leaders, and politicians in all these and other countries around the Persian Gulf place any faith in Pompeo’s protestations? Do you think anyone in the area actually wants to see the U. S. rain armaments on Tehran? When you observe a distant power mobilize to attack a region, with little support from anyone in the area, you observe a military preparing to lose.

If war between the United States and Iran develops, observe whether or not Saudi Arabia supports us materially, morally, or militarily. It let us stage military equipment on its side of the border when we prepared to invade Iraq, but it has never permitted U. S. bases on its territory.  It will not allow us to base our ships or planes there. Our best ally, also Iran’s declared enemy, would not be stupid enough to involve itself in a conflict between two powers that have waited to fight – each in its turn – since the middle of the last century.

Moreover, we have threatened war many times over the decades, with never a move toward mobilization. We send ships to the region, to show we are serious, but no one thinks a small fleet in the Indian Ocean can defeat Iran. So what is our strategy?